Even Skeletor has to deal with clutter 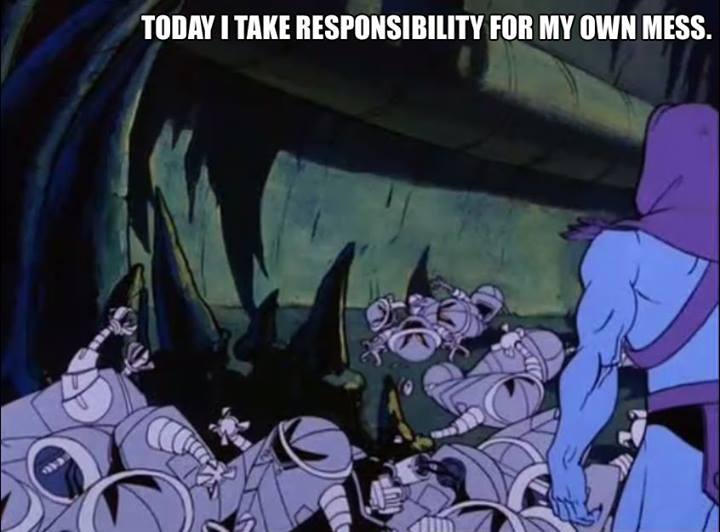 Posted by Bill M. at 04:00 AM in Clutter Combat, Comedy | Permalink

Jack Chick tracts and their parodies

Chick tracts are these little black and white comic books that born-again Christians use for witnessing.  That's a euphemism for "proselytizing".  You may have had some streat preacher hand you one, or found them in your mailbox, or what not.  They're created by a cartoonist named Jack T. Chick.  And no matter what topic you can think of that has ever upset Jesus freaks, you can find some Chick tract about it: sex, evolution, Islam, dungeons & dragons, Catholicism, homosexuality, rock music -- you name it. 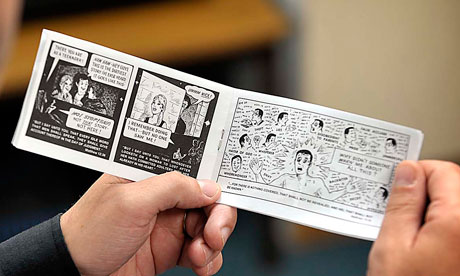 Ironically, the biggest "fans" of Chick tracts tend to be atheists, Pagans, and other non-Christians who just find them to be an entertaining collection of bad art work and fallacious arguments.  I knew one atheist who had a stack of about 50 of them on his living room table.

I've run into a number of Chick-related links over the years, so I thought I'd put them all here in one place:

And now for the parodies!

Fresh scents can only do so much

A friend of mine shared this picture on Facebook.  I don't know who created it originally.  But I did know that I had to share it on this blog once I saw it. 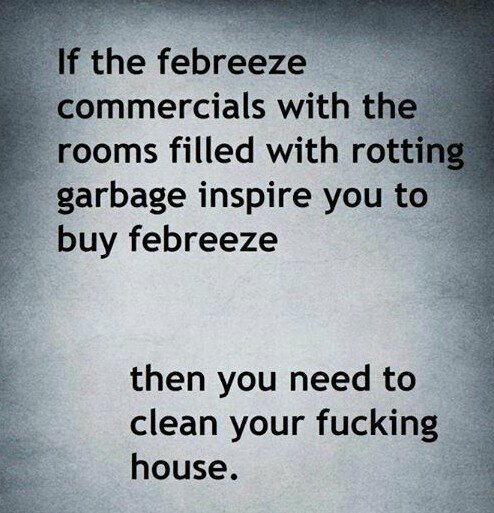 For those of you who don't know the reference, here's a video. (And if you don't know it because you're one of those people that doesn't watch TV, then kudos!)

And now, "It's Finally Ironic". Thanks, Rachael Hurwitz!

Some of you may remember reading one of my past rants against the misuse of "ironic".  George Carlin was sick this too.

This MSN article mentions "Fans of the English language rejoice! Someone finally fixed that stupid "Ironic" song. You know, the one where Alanis Morissette sings exclusively about things that aren't ironic. [...] Rachael Hurwitz has fixed everything with her song, "It's Finally Ironic," where the lyrics are rewritten so the situations are *gasp* actually ironic. Of course it doesn't hurt that it's also hilarious."

The music timing is a little sloppy, but I can overlook that, because this song is almost 20 years overdue.

This is probably old news for some of you, but here it goes anyway.  I was only introduced to it recently.

Some illiterate attempted to write an emotional short story, which has since become known as "The Poptart Tragedy".  It basically another one of those stupid little internet anecdotes that asks people to share or forward it.  But on top of that, it...well, I'll just let you read it for yourself:

gurl stops meking out n asks boi to get poptartz he dus.
den gurl teks deep breff. den gurl sais “bf i am pregnent will u stay ma bf” n he seys “no”.
gurl iz hertbrokn. </////3
gurl criez n runz awaii from boi wiffout eatin poptart n she has low blood suga so she fols.
boi runs ova 2 her.
she ded.</33333333
boi crie “i sed i no b ur bf…cus i wona b ur husband!”
he screems n frows poptart @ wol…a bootiful diomond ring wus insyd.
***LIK DIS IF U CRY EVRYTIM***

Not surprisingly, it spawned a number of parodies.  Actually, I don't know if they even qualify as "parodies", since read and/or act out exactly what's actuall been said.

I finally did it.  I made my own George Carlin website.  Here's the URL:

I may say more about the site later, but I figured that a brief mention of it was at least worth blogging about. Yes, I figured that April Fools' Day was a good date to launch it.  No, this isn't a joke; you can go to the website yourself.  I put a lot of hard work into it, and I'm sure I'll be tweaking and adding things later as the months go on.  I hope you like it.

Oh, and if this is your first time to aplaceformystuff.com, and only found out about my blog through GeorgeCarlin.net, well, sorry for telling you what you already knew!

Yep, I'm posting another one of these.  The truth is, I have a several that I made, and I'd like to make even more.  In fact, since I've been so frustrated at seeing bogus, unsourced Carlin quotes around the 'net, I'd like to set up my own website for this kind of stuff.  Maybe I'll split "A Place For My Stuff" into two pages, one blog and one Carlin fan/quotation page?  We'll see. 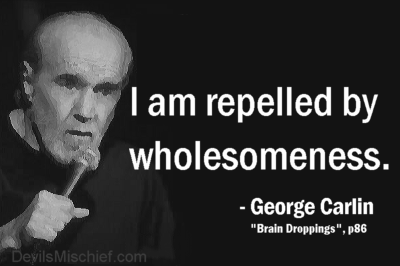 Actually I don't care about the Pope one way or another.  But since he's in the news, I figured I'd use this as another excuse to post a Carlin quote. 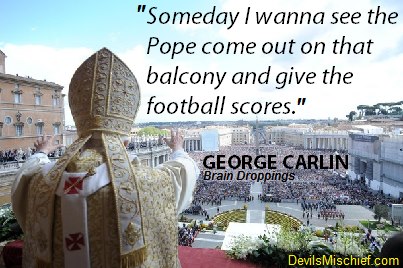 Last week I went to a funeral.  I was reminded of this quote. 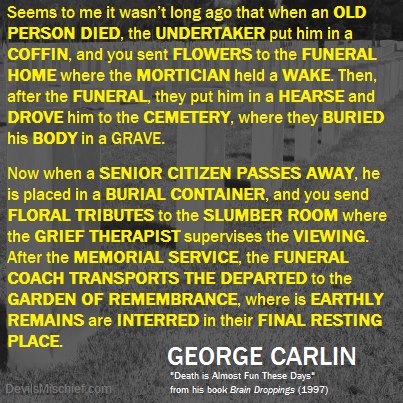 George Carlin did NOT write "The Paradox of Our Time"

UPDATE AUGUST 2013: Since writing this blog entry, I have lauched georgecarlin.net, which goes into a lot more detail about this topic, and now has the internet's biggest collection and analysis of authentic vs. bogus George Carlin quotations.

"The problem with quotes on the internet, is that it's hard to verify their authenticity."
- Abraham Lincoln

Ever since I got on the internet some 20 years ago, I've come across examples of rants and quotations that were falsely attributed to one famous person or another.  You would think that with the internet growing and sites like Wikipedia and Snopes becoming more popular, a lot of that BS would have been corrected by now.  Well, apparently not!  I still see so many pics of falsely-attributed quotations shared by the thousands on Facebook.  I even saw a sticker for sale on Amazon.com of one of these misattributed quotes.  Again, you'd think that if a person was going to put the effort into making something like this, that he or she would at least try to check up on the quotation first.  Nope.

One of the biggest targets of this problem has been -- guess who? -- George Carlin.  To this day, there are still numerous joke lists, rants, and other writings that people have incorrectly attributed to Carlin.

Possibly the most popular of these is a piece called "The Paradox of Our Time".  You've probably seen it.  "We have multiplied our possessions, but reduced our values.  [..] We've been all the way to the moon and back, but have trouble crossing the street to meet the new neighbor", etc.  Basically, a whole woeful list of "We can do X in the 21st century, but we can't (and should be) doing Y" examples.  You can read it in full over on Snopes.com, who has a page about it (with the explanation that Carlin did NOT write it): http://www.snopes.com/politics/soapbox/paradox.asp

I've noticed that the piece gets passed around a lot esepcially after there's some widely-reported tragedy in the US.  Not surprisingly, it was making its rounds again after the 2012 shootings in Newtown.

Here's what Carlin himself said about all of this back in 2001, on his official website:

Despite all this being made clear back in 2001, there are STILL idiots to this day who forward pics and emails saying that he wrote "The Paradox of Our Time".  Hell, I've even seen "fan" sites for George Carlin who post them!  You would think that a self-proclaimed "fan" of Carlin would have heard about it by now and know better.

What really pisses me off though is when I find somebody who does this, and explain to them "No, Carlin did not write this. And here's the evidence.", sometimes they'll still say "Well I still like the quote, so I'm going to keep it up on my page."  What a bullshit excuse!  If you fancy yourself a Carlin fan, then stop associating a bogus quote to him, especially after he made it clear that he doesn't want to be associated with it!  And if you do like the quote, then give the credit to the person who actually wrote it, not to somebody else like Carlin, who didn't want to have anything to do with it!

So who DID write "The Paradox of Our Time"?  Well as the Snopes page says, it was a minister named Bob Moorehead.  It was published in 1995 in a collection of essays called "Words Aptly Spoken".

Oh, and by the way, Moorehead was arrested a year later for indecent exposure in a public restroom in Daytona Beach.  Go figure.

So if you want a quote you can share with your Facebook friends or put on your own blog, try one of these ones which I created.  Show them to the people who still share quotes falsely attributed to Carlin. 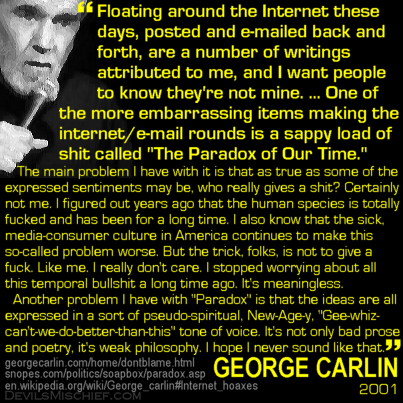 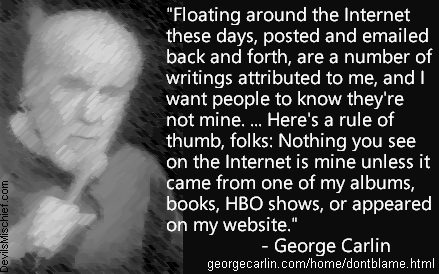