Low balances on too many Vanilla Visa cards? Here's one solution.

One of the biggest magnets for clutter, at least for me, is the open space around my desktop computer. Recently I had to clear this out because my ISP was giving me a new modem.  In cleaning the area, I stumbled across a couple of Vanilla Visa cards.  I had two more I was keeping in my wallet. 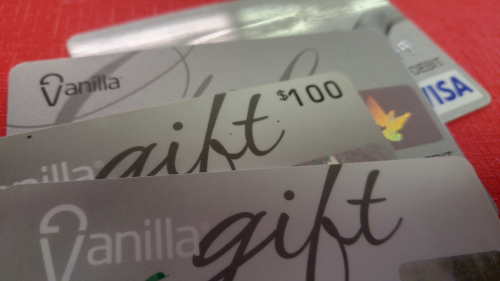 For those who aren't familiar with the Vanilla Visa card, it's essentially a prepaid credit card.  A lot of drug stores and supermarkets sell them.  Some companies will give them out as gifts too.  You purchase the card for a flat fee and load it with a set amount of money, either paying for it with cash or from another credit card.  Then you can use it just like a credit card.  There are no additional fees; you already paid that up-front when you bought the card.  Some versions of the card are re-loadable, and some aren't.  I was using these for a while to help keep myself in budget, namely by loading a Vanilla Visa card with a set budgeted amount from my credit card, and then using only that loaded card to make purchases for the month.

One problem with these cards is that you can end up collecting a stack of them with low balances.  You may have one card with a balance of $1.29, another with a balance of $4.90, and a third with $11.50.  Unfortunately, you can't transfer all of those little balances together to one card.  So if you want to buy something that's $15, you're out of luck.  In theory, you could use the $11.50 first, then pay the remainder with one of the other cards, but most places won't let you split payments like that.

I searched on-line for some solutions.  Some suggested using them at the gas station.  It seems like a bit of a hassle to the clerk though to say you want to pay for 21 cents on pump #3, then come back and say you want to add 59 cents using this other card, and so on.  Besides, I think that like many places, some gas stations have a minimal amount that can be charged for a card.

Here's one solution that worked for me: transferring the amounts to Amazon!

Some pages suggested buying separate Amazon gift certificates for each of the separate cards you have, and them redeeming them.  But I found that you can just add them directly to your current Amazon gift card balance.  Here's how I did: