Brawndoism: When Stupid People Misunderstand the Smart as Stupid 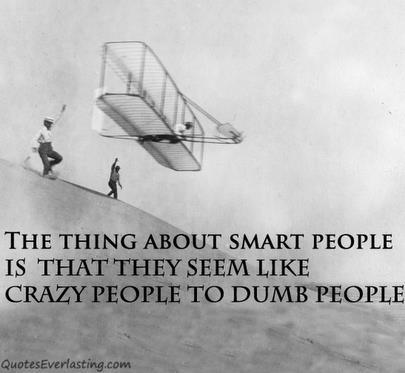 When I got to middle school, I had to pick a foreign language class.  While most students were taking Spanish or French, I wanted to do something different, so I chose German.  I ended up taking German in middle school, high school, and college.  It's come in handy professionally for me too, with a few companies I've worked for.

One strange thing I learned about the German language is that it has quite a number of nouns for which there's no equivalent in English.  The German word Schadenfreude for example refers to a type of pleasure derived from seeing other people's misfortunes.  We can describe the concept in English as I just did, and many of us have felt it when we've laughed at a "Fail Blog" video clip.  But there's no single English word to describe it.  You can break the word down into a literal translation (Schaden + freude = "damage" "pleasure") but that doesn't tell us much.  Then there are wonderfully longer German words like Lieblingsfreizeitbeschäftigung.  I'll leave it to the reader to look up the meaning of that one.

In some cases we've taken foreign words and outright made them part of English use. We've done this with French words like déjà vu or gourmet, but we've done it with German too, when we talk about a culture's zeitgeist, referring to somebody really skilled or knowledgeable on a particular topic as that topic's meister, or a person having a doppelganger.

But enough of my introductory spiel.  Let's get to the headline topic.

Take a look at this scene from the 1987 horror movie House II.  Jesse (left) and Charlie (right) are on a dangerous mission to explore a room in Jesse's house.  Charlie arrives to the scene with a machine gun.  The following dialogue ensues: 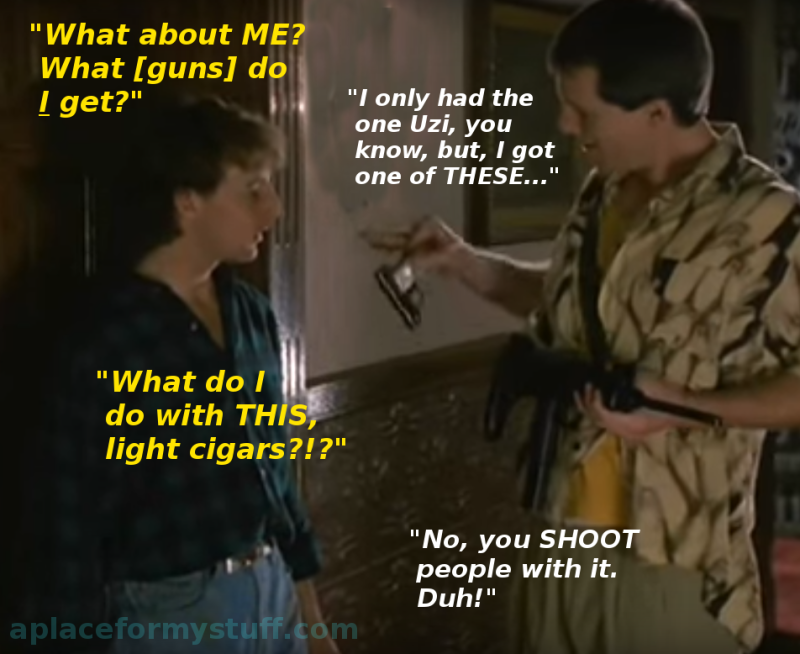 This scene sticks out in my mind as one of the first examples I saw of the following phenomenon:

Even if you've never seen this movie yourself, I'm sure you've seen other examples of what I described above.

So is there a word for this phenomenon?  Where something smart goes over the heads of stupid people, to the point where it's ironically perceived as being stupid?  I don't know of one in English.  I figured the Germans might have a word, but I haven't seen one.  If there's a word for this in some other language, then I'd love to know about. So far, I haven't heard one.

I ranted about this on Facebook before.  A friend of mine, Drew a.k.a. artist Mister 47 of Abaddon Arts, LLC, proposed the following word for it: Brawndoism.

The name is derived from "Brawndo", the fictitious brand name of a sports drink in the movie Idiocracy (2006). For those who aren't familiar with the film, it's about a man named Joe who is put into hibernation as part of a government experiment, only to wake up 500 years later to a world where everybody has an IQ of around 70 or below.  This now leaves Joe, who has an IQ of 100, as the world's smartest man.  He's asked to solve nation's food crisis and dust bowl problem, and learns that people have been watering crops with a green sports drink called Brawndo.  His suggestion is to use water instead.  But as you can imagine, he has a difficult time convincing the cabinet members at the White House:

And again, even if you haven't seen either of these movies, chances are you've seen Brawndoism.  For example: 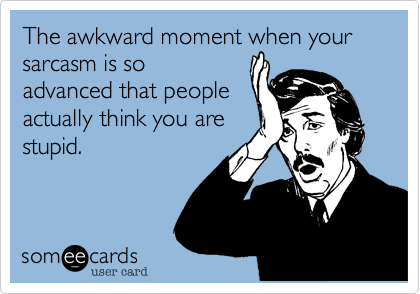 I'm hoping that "Brawndoism" or a similar term catches on.  There's a power in having a word to describe something.  Maybe if we have a word for this phenomenon, it will be easier to point it out when it happens.  Unfortunately, by the very nature of Brawndoism, people on the "stupid" side probably won't acknowledge it when it happens.