I was reading the news about the Ringling Brothers circus closing.  It made me think of my very first time I went to the circus. I’ve always had a pretty good long-term memory.  One of my many childhood memories is going to the circus with my father when I was about 3 years old.  Here's my attempt at remembering every detail I can about that day, almost 40 years ago.

The Skill Of Not Neglecting Neglection

First, to put this event in perspective, it's worth mentioning that I was the first child in my family.  When you’re the first child, you’re the center of attention.  This doesn’t mean your parents necessarily love you more than your siblings, but it does mean you marked the transition of your parents from “childless couple” to “parents”. My brother was born when I was about 2 and half years old.  When that happened, I was suddenly no longer the only child in the house.  I was no longer the center of attention. The new baby was.

My parents didn’t neglect me, though.  Somehow in the middle of work, raising a second child, going to night school for a master’s degree, and playing in a band, my father found time to take me to the circus.  So here's as much as I can remember about what was one of my first "father & son" trips.

My Circus Story: The Hall

We arrived in a winding hallway.  My father pointed to a humanless, automated organ, playing a song as the white and black keys mechanically went up and down.  At the time, I took it as a gag to imply there was an invisible man playing.  I guess the line between circuses and Halloween wasn’t so fine for me in this new experience.  Speaking of which…

We continued walking down the hall, and a clown appeared, looming over me, just a few feet from my face.  He smiled and said hi, continuing to stare at me from above, arms out stretched.  I just stood there in silence.  I was not scared.  But it was a lot to take in at once.  “Billy, you say ‘hello’?” my dad requested.  I just continued to take it in.  I looked at the chosen patterns of the clown’s greasepaint.  He was certainly a man underneath all of that.  I could make out the normal adult that was shielded by the painted mask.  He was none the less some stranger I’d never met.  Both the clown and my father quickly gave up on trying to make me say hello.  Realizing that the situation was uncomfortable (for them, not me), they went their separate ways.

I followed my father into another room, lit by a few naked light bulbs.  Through the huge crowd of people chatting and shuffling forward in their overcoats, I could make out the bars of a few cages.  “Hey Billy!” said my dad, pointing over to one of the cages.  “Look out for the bulllll!”, he jokingly sang.  The phrase was a jingle from a 1970s TV commercial, and one of many, many catchphrases he’d end up use around the house.  I looked over toward the other end of the room to see a behemoth of a bison. It stood still, but with anchored authority.  I gasped.  It was my first time seeing an animal that large before.

I found myself shuffling over with my dad to tall stacks of cardboard trays, each containing dozens of tiny 4 oz. Dixie cups filled with dry animal food.  I held my cup.  I fed an animal or two.  I held my little cup under the mouth of one goat.  It didn’t look at me nor the cup.  But after its mouth started to eat a few morsels, it then nonchalantly proceeded to pull the entire cup out of my hand.  I heard the Dixie cup crush under its teeth as I watched the cup fold into a triangle.  “Nooo!”  I screamed.  I turned around and started walking away, hands in the air.  "Ahhh!"  It was admittedly a bit of a mock-horror act on my part, as I played along with this strange experience of shock and humor.  “Billy, Billy!” my father called behind me.  “I got it back!  I got it back!” I turned back around. He presented my little food cup back to me, which he had managed to salvage from the goat's mouth. while I had my back turned. 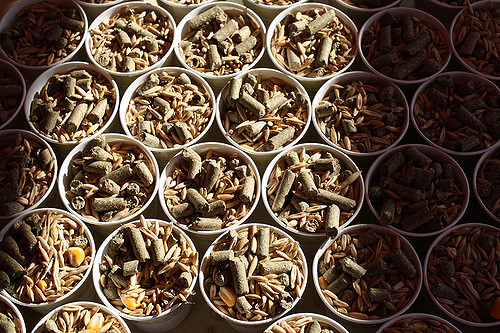 I really can’t remember if the petting zoo came before or after the main big top show that day.  But I do remember sitting in the dark stands with my father as we watched the main ring far below. I don't remember too many details of the show itself, but I'm sure it was standard circus fare. The only specific parts of the main show itself I really remember were ones where my father leaned over to me and commented.  “Ah-HA!”, yelled a magician.  “He just said, 'Ah-HA!'", my father commented.

At some point there was a clown with a rubber chicken hanging off of his back.  The gag was that he didn't know it was there, but the audience knew.  We were instructed to yell, "THERE'S A CHICKEN ON YOUR BACK!"  He looked back and forth but pretended he didn't see it.  We were instructed to yell it again.  "THERE'S A CHICKEN ON YOUR BACK!"  He still didn't see it. Seeing that the clown remained oblivious, without any cue, I started to yell the phrase again.  My father quickly hushed me, as this wasn't the time to keep yelling. [NOTE: After I wrote this part, I realized there's a slight chance I could be conflating two different childhood memories on this one. I'm pretty sure the chicken-on-your-back thing happened here, not at some clown or magician at a kids party or something, but as with any kind of memory recall like this there's always a chance I'm wrong.]

The lights flickered off and a man in the ring was seen shaking and running around with his arms in the air, painted like a skeleton. “Ooh, a skeleton.” my dad said with a mix of mild surprise, commentary, and intrigue. 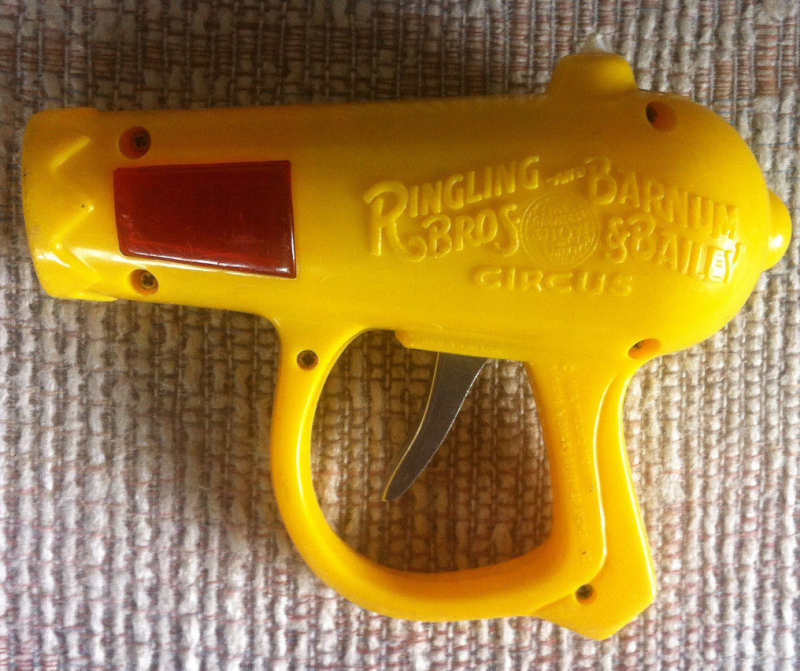 At various parts of the performance, the stage lights would turn off as a new act moved to the stage.  It was during those brief seconds of darkness that we, the audience, did our part for the show: flashing lights and noise makers.  My instrument for this was a little yellow plastic gun. It was shaped like a fat hair dryer with a silver metal squeeze handle, and the circus’s logo in raised lettering on the side.  During that time, I was told to fire the gun.  Pulling the handle turned some mechanism inside, producing sparks as some internal gear spun and ground itself inside in a whirring rattle noise.  They glowed red through the red plastic windows on the side of the gun.  Other people in the audience similarly flashed their spark guns or special flashlights during these lights-out moments, effectively becoming part of the show.  There was one time when I decided to fire my gun as we were sitting during the lights-on part.  My father quickly told me to hold off.  I did.  [Note: Wondering if my vivid memory of this was still reliable, I searched eBay for '1970s barnum circus sparks gun'.  The photo here confirms what I remembered!]

I ended up keeping that little sparking gun for a few years.  But of course the sparks only had a so much of a shelf life.  At some point, squeezing the trigger would no longer produce any sparks. Years later at different circus trip with the whole family, my brother would have one himself, while I held a blue flashlight with a spinning mirror.  And some years after that, I remember seeing them both guns in the toy box, one clearly older and more worn out than the other.  No doubt the guns wound up with Toys for Tots as the years went on and more toys came in.  Regardless, history repeated itself that time all four of us went, as my parents shushed my little brother when he tried to fire his own aforementioned yellow spark gun once during the lights-on part. 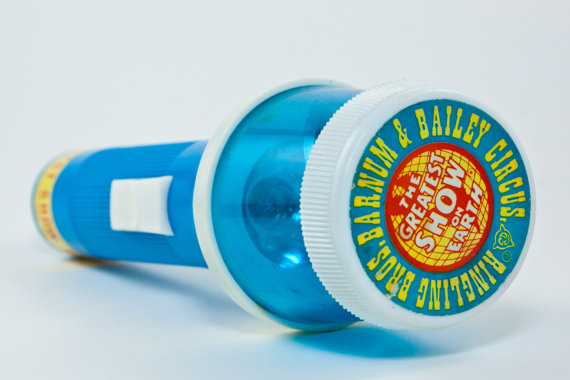 My family ended up doing countless things all together in the years that followed: car races, zoos, theme parks, beach trips, board games, ball games, rock concerts, and so on. But the four of us also did plenty of things one on one.  We still understand the value of all getting together, but we also all instinctively know the bonding value of just two family members doing something alone together too.  That was something I got from the circus.