Here's the short version of this two-part blog post:

Before describing this rebinding project of my copy of "The Just Led Zeppelin Real Book", there's some background information on this book that I'd like to talk about.  First, it might be necessary to talk about two other books: "Fake Books" and "The Real Book".  I'll get into the actual details of my rebinding process in part 2.

There are countless different music transcription books and "sheet music" out there.  That is, these pieces of paper with symbols on them which represent musical notes and other components of music (lyrics, rhythms, tempos, etc.), typically in the established conventional format known as standard notation.  Granted there are lots of musicians who learn songs purely by ear (i.e., listening to a recording of a song, then gradually trying to duplicate each note on ones own instrument) -- too many, in my opinion. But there's still a lot of power and convenience to having music in a written form that can then be passed on from one musician to another.  The works of all the great composers over the centuries would be lost if we didn't have such a system.

However, if a band or individual musician wants to reproduce a song, say "Day Tripper" by the Beatles, they don't necessarily need a full note-for-note transcription of everything in the recording.  Listeners, likewise, don't need to hear the original instruments and everything note-for-note, beat-for-beat from a recording to recognize a particular song.  Making a passable performance of a piece like this is called "faking" the song.  I have a "fake book" for the Beatles, which covers over 100 of their songs by just presenting the lyrics, sheet music notes for the main melody, and the chord changes.  That's really all you need to fake a lot of the rock and jazz songs out there, and those are the elements which a lot of fake books contain.  Heck, some don't even include the melody, since 1) they figure musicians who've heard the song can already sing the melody anyway, and 2) I think publishing the music along with the lyrics usually costs more than publishing just the lyrics, due to the way that copyright laws and publishing rights work. 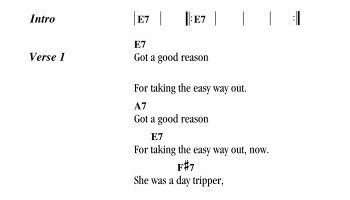 Unfortunately, fake books aren't always reliable. Some are a bit too simplified.  Some transcriptions are flat-out wrong.  And as mentioned, some examples like the one above don't even include the melody line written out.  Some also have very impractically tiny writing, or are books that won't stay open on a music stand.  Back in the 1970s, some frustrated jazz musicians got together and compiled what's known as "The Real Book".  It's about the size of a phone book (hey, remember those?!?), containing hundreds of lead sheets for various jazz standards.  Anybody who's a jazz musician has no doubt run into The Real Book.  They cost about $50, and were essential. If they don't own a copy themselves, then they've no doubt had a photocopied page from it thrown at them before.  This was typical for me when I was playing bass in high school and college jazz ensemble.  "Here, Bill, do a walking bass line over these chord changes" was the usual command.

Despite the huge popularity of The Real Book, it remained a black market item.  Apparently, the makers never got the copyright clearance on the songs.  Still, copies of "The Real Book", "Real Book II", "The Latin Real Book", "The Vanilla Real Book", and other off-shoots continued to be printed up in somebody's basement and sold under-the-counter.  Sher music DID finally make a legal copy of "The Real Book", not only clearing all of the copyrights but also fixing some mistakes along the way. 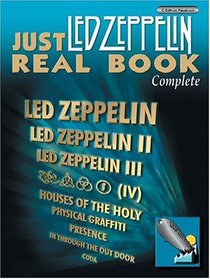 The popularity and legacy of the original Real Book has lent itself to other music books being created in the same style.  One of these is The Just Led Zeppelin Real Book.  As the title implies, it's essentially every song from every studio album as it was originally released, plus the one and only one studio B-side they ever released ("Hey, Hey What Can I Do"), all presented in the same sort of format as The Real Book.  So that means it has the lyrics, chord changes, transcribed melody, and overall general structure of every song, all printed in the nice big Real Book font.  Like the original Real Book, it also has a plastic comb binding (remember what I said earlier about many books not being able to stay open to a particular page when you have them on the music stand). Sorry, guitarists: this isn't a guitar tablature book; expecting that here would be like expecting The Real Book to show you where Miles Davis put his fingers on the trumpet buttons to play the solo of "So What".  Though this book does additionally provide tablature transcriptions for several songs, as well as guitar chord diagrams, and which special tunings Jimmy Page used on different songs.

Besides being a big Led Zeppelin fan ever since I was a young teenager, I've also enjoyed playing Zep on the bass, and in more recent years I've been the singer for no less than 5 different Led Zeppelin tribute bands.  In addition to singing with these bands, I've also done a little bass playing, mandolin playing, and harmonica playing here and there.  So this book has been vital to me.  There have been times when I've had to look up and check things to tell OTHER band members what chords were being used and what not.

This is a big book that's been slapped open and closed countless times, shoved in and pulled out of gig bags, traveled with me, and has a cheap plastic comb binding.  Needless to say, it became beat up.  It was time to do something about this.  The details of that story are continued in part 2. 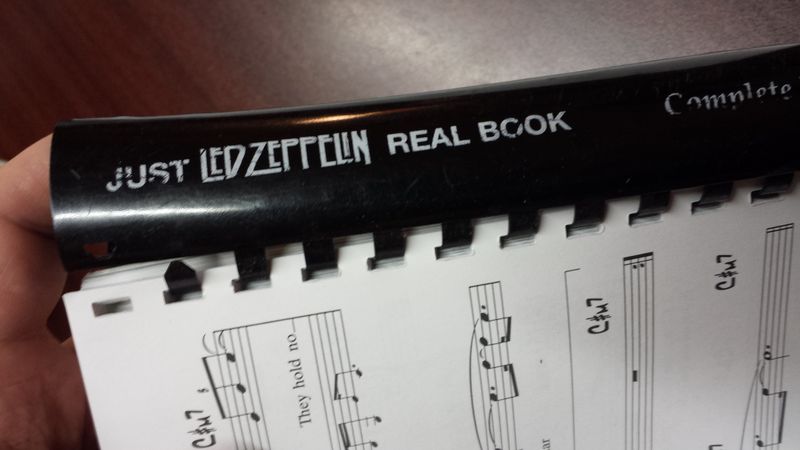