Upgrading is Compuslory! Changing batteries on a talking Cyberman.

If you found this blog entry via searching the web for solutions on how to replace the battery in your talking Cyberman figure, well then, you're at the right place!  If not, well, then you might learn something about wristwatch batteries.  And Doctor Who.

I've been a fan of Doctor Who since I started watching as a toddler in the 1970s. Not surprisingly, I do have a lot of Doctor Who stuff.  One of these is a talking figure of my favorite Doctor Who enemy, the Cybermen.  I bought my talking Cyberman in a comic book shop a few years ago.  Press the button in the middle of the chest, and you can hear one of several recorded phrases. 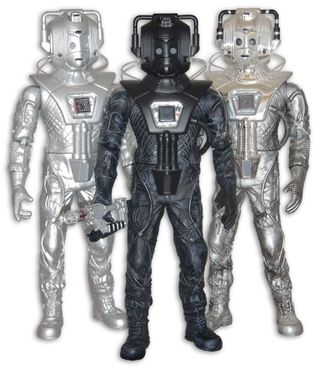 The talking of course is battery-operated.  Unfortunately the phrases eventually became no longer audible, so I knew I had to change the battery.  For a lot of collectors, I'm sure the mentality is "Don't press the button so much!  You don't want to ever have to replace the battery!  That's because it might involve opening it up, and you could scratch or break it in the process!"  I can understand that.  But if like me you'd rather have your Cyberman figure talking, instead of having the batteries rotting away inside, then here's how to change the battery.

First, disconnect the hose that's attached to the front of the Cyberman. Yes, it pulls off. 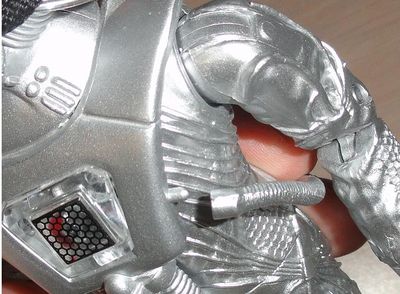 Now pull off the entire head and chest plate.  It's all one piece, and there's a peg underneath the back that holds it in place.  If you pull the back piece away from the body, you can pull it off without breaking it. 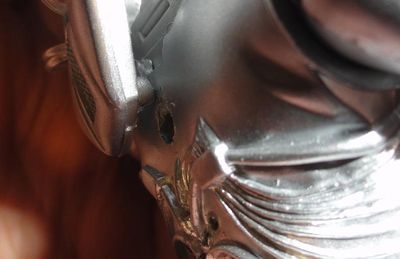 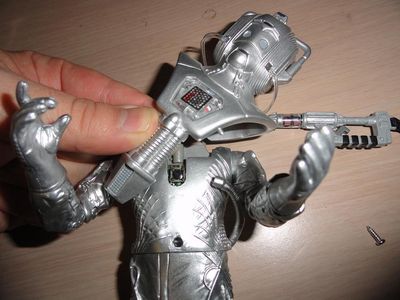 Underneath is a little gray plastic box, whose top door is screwed shut with a tiny philips screw.  Get a small philips screwdriver and unscrew it, then take off this lid.  You'll see two batteries inside. 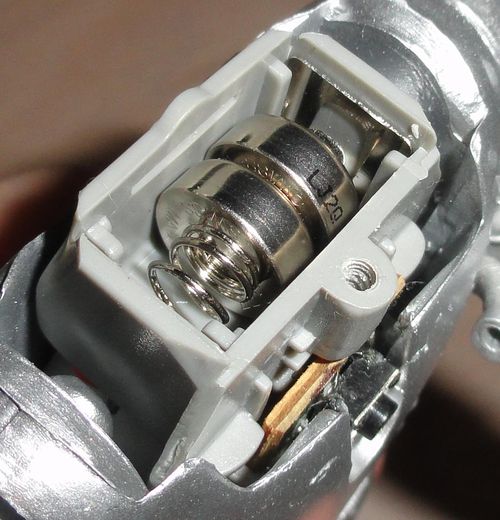 So what kind of batteries do you need?  That's a good question.  It turns out that there are multiple correct answers.  The etchings inside the case itself say to use two 1.5-volt "LR44" batteries.  I removed the dead batteries, put them in my pocket, and went down to the store to look for new LR44 batteries.  I couldn't find any. I certainly saw other watch batteries, but none with that size number.  I thought that surely I could only use LR44, right?  I mean you wouldn't be able to put C batteries in a device that takes D batteries, or AAA batteries in a device that takes AA batteries, right?

Well it turns out that watch batteries, also known as "Button Cell" batteries, are a little different.  I learned that there are actually multiple model names for these particular batteries which are all compatible.  Whether it's "LR44", "303", "357", different manufacturers use slightly different names, but they're all 1.5 volts and roughly the same size.  Wikipedia has a handy page on the topic.  I bought a pack of Rayovac "303/357" and put them in.  Screwed the lid back on, put the Cyberman head back on and...it works again!

Have I already told you enough about a topic you don't care about?  No?  Then watch this clip with a review of the figure: