The Non-Federal Investigation of Bureau: candies

I could easily make a dozen posts on the stuff I found on my bureau alone.  But I'll try to do this in groups.

One of the more glaring types of clutter you might find are things that are edible, in places where you should only expect to find non-edible items.  Even the types of consumable items that don't seem to have an expiration date, suddenly DO look "expired" in this situation.  It's the "ewww!" factor, for me anyways. 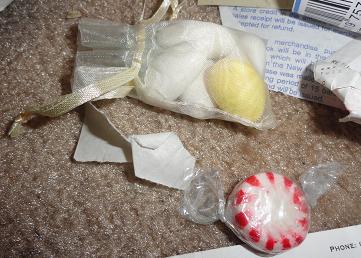