The Non-Federal Investigation of Bureau: Receipts 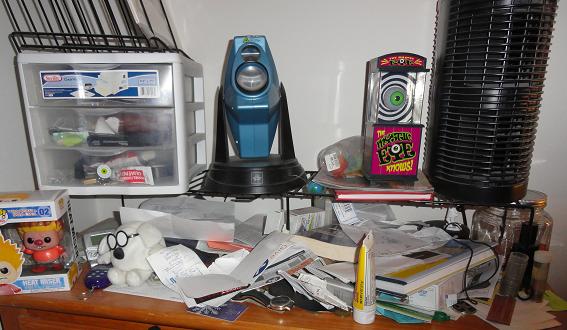 One of the new target areas on my most recent "to-do" list was my bureau.  Namely, the top of my bureau.  Lots of stuff collects there.  Come to think of it, that was the same situation with my father when I was growing up.  The bureau top became quite the stuff magnet.

I started to tackle this once and for all.  It's still a work in progress as I type this, mainly because it's been a careful process of sorting through it.  I'm most certainly going to end up throwing away most of it, but given that some of these things include papers with bank account numbers, receipts, etc., it's worth dividing the trash into "to be shredded" and "not to be shredded" piles.

The most popular type of item was, indeed, receipts.  Usually I'm very good with keeping receipts and keeping them separate.  Normally I keep them in my wallet, then eventually transfer them to an envelope when my wallet gets too full.  They then get transferred to their respective bank or credit card statements before being filed away with them.

Still, I managed to find 20 loose receipts on my bureau.  Some of these were on my wife's credit card (she doesn't want to throw them away, but doesn't want to keep them either, so if I'm around she hands them to me).  Some were just too big to fit into my wallet.  Here's just some of what I found: