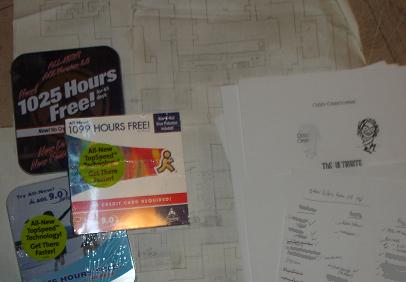 Another batch ready for the trash.

Of course, AOL didn't want you to think that there was a world outside of AOL.  Let me put it this way.  Instead of a search engine, they had an "AOL Keyword" look-up.  Some companies back in those days had not only a URL for their website, but an "AOL Keyword".  That way, AOL uses could just type the keyword and be delivered to the site.  Funny things happened though if you tried to look up AOL's competitors.  The AOL Keyword "yahoo" for example just took you to an AOL page explaining how you can use their own search engine to search the web.

Anyway, these free AOL installation discs, which always included "First [however many] hours FREE!"  Yes, in those days some services charged by the hour of internet use time.  But these damn discs were everywhere.  I knew some old college classmates who seriously used them as coasters.

So why did I have these?  Well some people got so fed up with getting these in the mail constantly, that they decided to start a campaign where they wanted people to send them the AOL discs they received, so that they could do a mass mailing of these BACK to AOL.  It was a gesture to say "Enough with these damn CDs!"  I guess I was keeping them for that purpose.  Of course, I never sent them in.  Time to toss these once and for all