And now, some more ramblings about audio cassettes.

Like VHS, audio cassette tapes are hard to get rid of.  You can't even find used CD stores who will take them these days.  They're scoffed at as being an unwanted medium.

It goes to ridiculous lengths, though.  I remember seeing the debut CD from Badlands on eBay.  For those who don't remember, they were a supergroup formed by former members of Black Sabbath (Ray Gillen, Eric Singer), and Ozzy Osbourne's former guitarist (Jake E. Lee).  Back in the day when this came out, tapes were reigning supreme, so not many bought the CD.  The CD went quickly out of print, so I saw it here in this auction going for over $100.  Meanwhile, the cassette probably wouldn't even sell for five bucks.  Yes, I know that people fear cassette tapes because unlike CDs, cassettes can get worn over the years, or get damage from magnets or the sun or something else.  But if you want the album so badly that you'd pay over $100 for it, can having the cassette be THAT bad of an alternative?

Fortunately, I've managed to get rid of a lot my tapes over the years, which would otherwise just be taking up room and collecting dust in cases on my living room floor.  A few years back I gave a couple dozen to a woman I was dating at the time.  She was divorced and lost most of her music collection to her ex-husband, but had a lounging room in her apartment with a cassette boom box.  So she was happy to accept some of the stuff I gave her.  And just about all of it, that 80s metal she and I unashamedly loved.

I've also sold a number of tapes on eBay by pairing them up with other things that people were more apt to buy.  For example, I sold 7 Anthrax tapes along with an Anthrax t-shirt.  Made more money than I thought I would make. 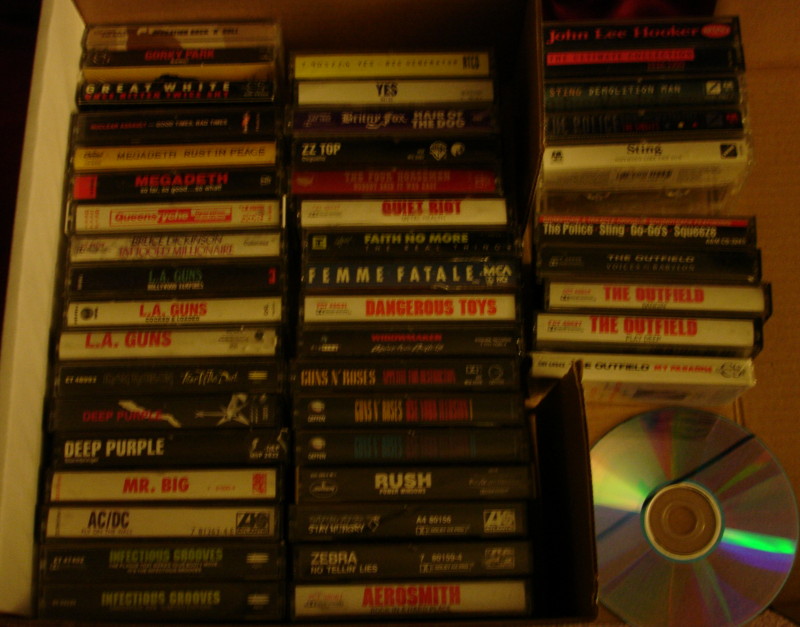 So here's my most recent trick.  I'm putting a set of 45 tapes on eBay, with an mp3 disc thrown in as a bonus.  I just took the mp3s that I ripped from the same albums I had on CD, and burned them to a DVD-R disc.  As far as I know, throwing in a bonus digital recording with the original recordings isn't against the rules.  Hopefully this all goes well.  I think I can throw the rest into another set, long with a bunch of cassette tray holders.