- The Residents, "Boxes of Armageddon"

Only one more day before I see my favorite band here in my home town.  Yay!!  I pulled the title of this blog from one of their songs.  That's because after looking around my room and thinking "What I can get rid of next?", I realized that I have quite a number of boxes of...stuff.  So this time I thought I'd keep the mission pretty simple: pick two or three of the boxes, get rid of what's in there, then get rid of the box.  And by "Get rid of what's in there", I mean that each object should go to its expected place (e.g., a CD goes on a rack with the rest of the CDs), or gets put in the eBay/thrift pile, or gets thrown away. 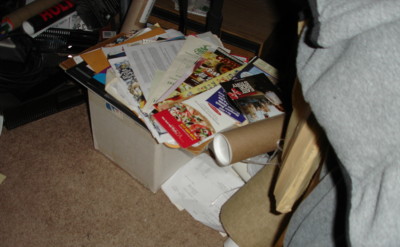 First was a box of -- gee, whadda ya know -- cassette tapes!  Not just any random cassette tapes, though.  These were all "homemade" tapes.  A box of store-bought blank tapes with stuff recorded on to them.  No thrift store or auction would take these.  They're either dubs of friends' tapes I made back in the day that I either own on CD or can find on CD, or personal stuff (band demos, etc.) that I should make digital copies of.  So that means 1) throw out the album dubs, and 2) sift through and copy the rest.  Step #2 is a whole project in itself.  Like the VHS conversions, this is something that's going to take a few weeks to plow through.

Looks like I'll be listening to some tapes tonight.  Stay tuned for box #2, which makes me wonder just how many different weird things CAN be crammed into a single box.