Quite some time ago, I came to the realization that have more clothes than I have space to put them in.  Or rather, not enough space for all my CLEAN clothes.  If I always have some dirty clothes in my laundry bag, then it works.  Otherwise, as I've found out, cleaning all of my clothes leaves me with not much room.

What's the best solution?  Getting a bigger bureau?  A second bureau?  If you've been following this blog, you can probably guess that the answer is NO.  I'm sure I can make better use of my closet and other space, but a more practical solution is to get rid of some of the stuff I never wear.

This is a task that I'm sure will show up in more detail in the future.  For the moment, let's just focus on whites.  No, not Caucasians. I mean white loads of laundry. 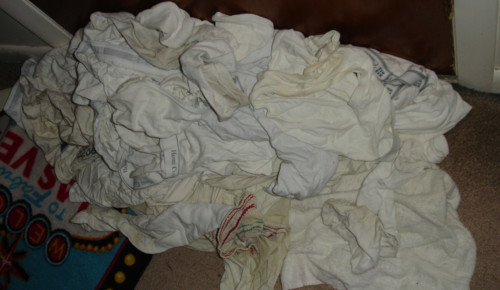 Don't get all grossed out by the discolorations.  Those are from socks and dishrags, not underwear.

So my girlfriend visits and announces that she needs to do a load of white laundry.  I told that I have some white laundry, WAY down at the bottom of my laundry bag.  Since I don't wear too many white clothes, I can usually do all of my whites in one load.  As I type this, my whites are in the dryer.  Once they're done, here are some of the things I'm either going to throw away, or give to the local thrift store:

I'm going to answer that eternal question that people love to ask men: "Boxers, or briefs"?  Before I get straight to the answer, here's a little background on my personal undergarment history.

There comes a time in a teen's life where he or she stops and realizes "I don't like the clothes that mom has always been buying me.  And now that I can buy my own clothes, I'm going to get something different."  Maybe for some people it doesn't happen until well into adulthood, if ever. But this issue for me has manifested itself in underwear.

My father wears briefs.  So when my brother and I were growing up, that's what we wore too.  I found out later in college that they're also known as "tighty whiteys".  Probably the cheapest underwear you can find in the stores.  At some point, my brother discovered that he enjoyed wearing boxer shorts (a.k.a. "boxers") immensely more.  He has long since sworn off briefs.

Personally, I don't like wearing boxers.  As for why, well let me put it in as simple terms as I can, and let your imagination clarify the rest: when I wear boxers, I feel like a grandfather clock.  (If you still don't get the pun, think "pendulum").  But I really don't like briefs either, because sometimes they feel like they're cutting off the circulation to my legs.  The solution?  Boxer-briefs.  That's what I wear every day.

Unfortunately I have some of those "tighty whiteys" still in the laundry collection.  Some of them I've had since...damn, I don't even want to wonder.  Maybe as an adult I kept getting some as lame Xmas presents from my parents.  Why do I keep them?  Well, like many people, I have that "underwear reserve" pile way in the back of one of my draws, where the stuff I like wearing the least gets shoved back, until I have no more clean underwear left and thus the reserves must be tapped.  But this time, no more.  The briefs have got to go.  Buying more underwear, namely of the kind you like, is worth the budget, even in these tough economic times.  We're talking about the comfort of my genitals, for christ's sake.

And that makes a horrible segue into this next item, the veggie peeler: 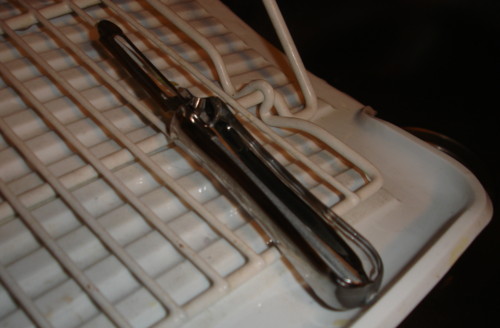 So my girlfriend and I are cooking dinner at my place, and eventually she gives up peeling the cucumbers and hands the cucumber and the peeler to me.  After several predictable phallus jokes involving the cucumber, I proceed with the peeling.

This was probably the same peeler that my mother used when I was a kid.  All of those nutrients I received though childhood, were processed along with this little instrument.  And boy, was this thing old.  It worked, but not so well.  But I get the peel off and it's time to chop.  Much to the shock of my girlfriend, I announce that yes, this bachelor does own a chopping knife.  In the far right draw.  She opens the draw and says "Son of a bitch!  There's a NEWER peeler in here!"  She takes it out, works it over the ill-peeled cucumber, and it runs smooth as anything.  She then throws away the old peeler.

If she didn't throw it out, I would have thrown it out myself, or put it in the pile for the thrift shop.  I'll leave you now with some words from Don Aslett's Clutter's Last Stand:

"Is [a] second-best [item] clutter or 'just-in-case'?  Add up all your second-bests and tell me what you're doing with them now. [...]  Why did you obtain a best?  That's easy: because you were unhappy with the old one -- it was worn, old, getting ugly, not working right any more, or you were simply tired of it.  Why do we keep things we're not happy with? No answer, except that we're clutter collectors. [...]  Sure, there's some glimmer of hope for those old worn watches, stiff work boots, leaky air mattresses, the bike with the bent frame, the too-small briefcase, that battered and shabby purse, that balding dress coat, the nicked butcher knife with the cracked handle, your no-longer-favorite rifle -- [but] just once you have the new in hand those seconds have [like a piece of gum] lost their flavor."