Recently I went though all of my photo prints and finally put them in albums.  I'll get into the "clutter" aspect in part 2.  First, I just want to throw in some relevant rants and ramblings about analog cameras and my first experiences with digital cameras.  Stay tuned for boredom.

Last month at a family holiday gathering, I ran into my cousin for the first time in a year or two. In conversation, he posed a somewhat philosophical question.  "Can you imagine just how many photographs have been taken?  Particularly in just the last few years?"  Of course it was a bit of a rhetorical question, but I said "I'd go so far to say that more photographs have been taken in the past decade alone, than in all of the years before that."

Yes, we had cameras before Y2K.  And like any piece of technology, what constitutes as a "camera" has changed a lot over the years.  We've basically had cameras for a little over 180 years.  Over those years, the technology improved and (just as important) people found ways to make cameras more affordable and easier to use to a mass market.  To quote James Burke, the first cameras pretty much required a PhD in chemistry to deal with the chemicals, and muscles to haul a heavy amount of equipment.  Eventually you had multiple-exposure rolls you could insert, flashes, a button that would open the shutter, automatic film loading, Polaroids, and so on.

On a side note, any of you fellow 30+ year-olds remember flash cubes?  Those big ugly disposable magnesium cubes that you'd attach to the top of the camera for a flash?  Usually they'd get marked automatically with an "X" after you used them.  Here's a clip of one lighting up in slow motion, uploaded by some guy whose spelling skills really suck:

Anyway, the cheaper and easier is became to take a photo, the more photos got taken.  We're at the point now where people whip out their cellphones from their pocket and take photos anywhere.  I've noticed that most concert venues have pretty much given up trying to enforce the "No Photography" policies.  Half of the photos you take on any digital camera, you end up deleting anyway.  But still, they were photographs that were taken.  No rolls of film to carry around either.

Finally, consider that we have twice as many people on the planet as we did in 1965.  When you add it all up, I seriously don't think it's all that far-fetched to think that at least 50% of the photographs that have ever been taken, have been taken in the last 10 years. 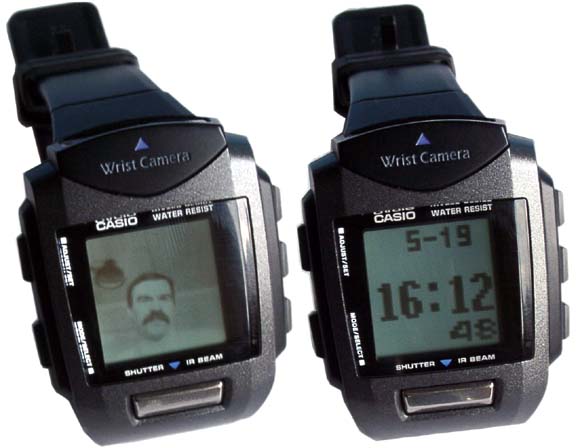 One final note about this watch and digital cameras.  When my cousin has posed the question of how many photographs, I mentioned another odd observation which I first heard years ago in college from my good friend Dave. Dave was wondering (among other related problems) just how many digital photographs one could make.  Let's keep things simple and use my watch as the example.  Each photo had 120*120 = 14,400 pixels.  Each pixel could be of any of the 16 grayscale colors.  So that makes 16^14400 possible photos that could make up the screen.  That's a number with over 17,000 digits!  It's huge, but the weird thing is, it's still finite.  You would think that the imagination is limitless, but if you think of every conceivable person or pose or scene that you can look at, there's still only a finite amount of pictures that look different from each other.  That also means that if you thought of something -- ANYTHING -- you could find a picture of it among the 16^14400 photos.  Weird, eh?

OK, enough of the camera rambling.  Tomorrow I'm going to talk a little about "analog" photographs (those printed ones we keep in albums somewhere) and straightening them out.